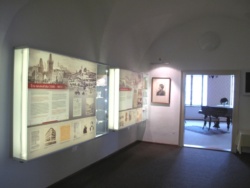 Do not miss visiting Havlíček’s apartment. At any time during the museum’s normal opening hours you can see this permanent exhibition entitled “Karel Havlíček Borovský – Life and Legacy” on the first floor of the museum. Karel Havlíček Borovský a native of the nearby village Borová was a Czech poet and journalist. He is considered the founder of Czech journalism, satire and literary criticism. His literary work is classified as realism, from the political point of view, he belongs to the so-called 2nd generation of national revivalists. In May 1945 the town of Německý Brod was renamed in his honour the town of Havlíčkův Brod. Read more about the exhibition and visit us in Havlíček’s house.

Exposition bears witness to the fate of Karel Havlíček

The whole exhibition is dedicated to Karel Havlíček who lived in the house with his wife Julie and daughter Zdenka before his deportation to Brixen. The apartment in Havlíček’s House, today’s museum was purchased by the parents of Karel Havlíček Borovský at the end of 1832. There are a number of personal relics in four rooms of the original flat where Havlíček and his wife Julie and daughter Zdenka lived and from where he was taken into exile in Brixen. The exhibition is located in the original interior of the mid-19th century. 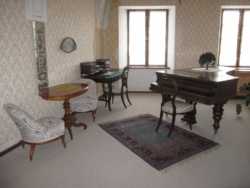 The furniture in the “bay window” room belonged to the parents of Karel Havlíček and served them already in Havlíček’s childhood. Karel Havlíček’s father had it made by a carpenter in  Přibyslav before the Havlíčeks moved from Borová. The desk and cabinet in the “office” comes from Havlíček’s Prague office of the National Newspaper. The furniture in “Zdenka’s Room” belonged to Havlíček’s only daughter. The piano she loved was bought by her guardian Brauner for the “national gift” (a lottery in favour of “Daughter of the Nation”). Ordinary personal belongings, today rare relics, once belonged to Havlíček, Julie, daughter Zdena, brother František, mother Josef and father Matěj. All this exudes a strange sadness, a testimony to Havlíček and his loved ones‘ life.

Admission includes a tour of the current exhibition and the underground corridors of the house.

Havlíček was not always an exemplary student at school 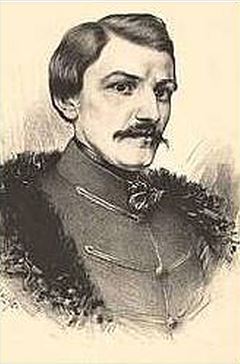 Since 1830 Havlíček studied in the town of Německý Brod, first at the main school, then at the grammar school. Before the arrival of his parents, he lived in lodgings by the Berliš family in a house called Dlabačovský located on the west side of the square in Brod. Havlíček remembers his childhood in Německý Brod: “I was honored to do strange pieces and not to give up to anyone”. Indeed, his school results were not very good at first, and he did not even have an excellent mark in moral education. Only later did he calm down and become an excellent student. Good professors from the Želiv Premonstratensians allowed older pupils to visit pubs on the outskirts of the town, Havlíček liked the pub “Na Rozkoši”. The students used to sit and drink beer, play cards and bowling, but mostly play the guitar and sing. Havlíček liked playing the guitar very much. In the local exposition there is a guitar, which had been considered Havlíček’s guitar for years. According to the latest findings, Havlíček’s guitar is owned by the National Museum and this one apparently belonged to his daughter Zdena. At the same time, it is connected with a moving story related to another big name of our culture, one of the most beloved poets, Jaroslav Seifert.

In 1838 Havlíček went to Prague and after two years of studying philosophy he entered the priestly seminary. After a year, when he was just on holiday in Německý Brod, he received a report of dismissal due to poor results. Havlíček looked for something to do, lived in Prague, studied Slavic languages, and in 1843 he took the position of a tutor in the family of Professor Ševyrev in Russia. When he told his father in Německý Brod, he was very angry and prophesied to Havlíček that he would destroy his career in Austria. Unfortunately, when he returned after two years disillusioned with the Russian situation, he could no longer talk to his father. Matěj Havlíček, father of Karel Havlíček, died three weeks before Karl’s return. Havlíček learned about it on his way to Německý Brod in a pub in Česká Bělá. Havlíček later wrote: “This unfortunate event has completely changed many of my plans , and I have to spend the whole winter at home with my mother”.

So Havlíček stayed in Brod, he wrote “Pictures from Russia” and because Německý Brod was at that time completely nationally indifferent, he organized Czech amateur theatre together with his brother František. Soon there were several burgher sons and daughters from leading Brod families willing to try and play. One of the enthusiastic amateurs was the daughter of a wealthy German merchant and councilor, Fany Weidenhoffer, who became a great love of his. Havlíček planned to marry her and therefore went to Prague to ensure his income.

He decided to “make his living by writing”. He wrote articles for newspapers and magazines and rarely went to Brod. However, he and Fany corresponded diligently. When he managed to completely discredit such a “patriot” as Josef Kajetán Tyl, he gained the favour of the whole young generation around Matice česká and the National Museum. In an article published on July 1, 1845 in Česká Včela, he delivered overwhelming criticism of his novel “The Last of the Czech”. He wrote about it to Fany: “I have gained a lot of acquaintances and fame in this very cheap way.” Havlíček became an editor of the Prague newspaper, which provided him with a steady income. There is a lot of speculation about why he did not enter the planned marriage. The Weidenhoffer family themselves quite credibly refute the most widespread version that Fany and Havlíček broke up because of his uncertain income. Soon after his breakup with Fany, Havlíček married Julia Sýkorová and on December 23, 1848, his daughter Zdenka was born. He was fully employed by both political and journalistic activities, so he only sent letters to Německý Brod, and he was rarely a guest here.

Five years later, when he was already disgusted with the constant disputes with the Vienna government, Havlíček decided to give up journalistic activities and moved to Německý Brod to his mother‘s place. She provided him with an apartment with a kitchen, two rooms and an alcove on the first floor facing the square. The corner room was equipped with a bay window and a closet with a bedroom. Havlíček wanted to buy a farm in the surroundings of Německý Brod and start farming. However, he failed because on December 16, 1851 he was arrested  right in the bay room and taken to Brixen. In a similar way, the unfortunate exile Tomáš Roland left the country for his conviction 223 years before and that may have contributed to the emergence of a national legend of the Bressanian martyr. The last time he returned to his father’s house was in May 1855 after his release from Brixen, when he was ordered to stay in Německý Brod by the police. He lived abandoned aside from the public life, his former friends from the patriotic sphere did not keep in touch with him. Later, he moved to his brother Francis, who bought house no. 87 in the Upper Suburbs.

He died in Prague on July 29, 1856, where he had moved to with the permission of the police in May 1856 to seek a doctor. Six years later, Havlíček was no longer dangerous and so the whole nation began to respect and glorify him. In 1862, on the eve of the unveiling of a memorial plaque at Havlíček’s House in his birthplace Borová, a national manifestation took place in front of the house, attended by about 10,000 people. The parade was led by members of Sokol and politicians Sladkovský, Zelený, Grégr and Barák took part. When in 1872 Havlíček‘s daughter Zdenka died of a familial lung disease, she was seen to the graveyard of the St Vojtěch church by thousands of people including even Palacký and Riegr.

In 1871 a metal memorial plaque with Havlíček‘s head was placed in the middle of the house facade and the house gable was rebuilt in neo-Gothic style according to the plans of architect František Schmoranz from Chrudim. In 1880, Havlíček’s mother sold the house to the town‘s savings bank. In 1920, the Havlíček‘s House was acquired by the town of Německý Brod and donated to the Museum, which established here the Karel Havlíček‘s Memorial. Today, the house is home to the Vysočina Museum of Havlíčkův Brod, a state-funded institution of the Vysočina Region, and the permanent exhibition is dedicated to Karel Havlíček‘s living in Německý Brod.